Food is a culprit for some of the most common holiday pet emergencies. Be cautious of the following:

*Chocolate gold coins. These treats—sometimes used in Hanukkah and Christmas traditions—should be kept in a location that cannot be accessed by pets. Not only do the chocolate coins contain theobromine and caffeine, but the shiny foil wrappers can also cause intestinal issues if digested.

*Xylitol. This sugar substitute causes a dog’s blood sugar to drop quickly. This poisoning can be treated but causes liver failure if not treated properly.

*Holiday spices. Spices commonly used in holiday foods and treats, such as nutmeg and cinnamon, can cause a variety of issues—from mild stomach upset and blisters in the mouth to more severe symptoms like vomiting and hallucinations—if consumed in large quantities.

*Turkey stuffing. While some holiday staples, like turkey, are okay for pets, be sure to remove any excess fat and skin and be wary of turkey stuffing. Stuffing often contains onions and/or garlic, both of which can cause potentially dangerous anemia if consumed in large quantities.

*Bread dough. When bread dough is ingested it continues to rise, causing an intestinal blockage.

*Latkes and sufganiyot. For pets, ingestion of these Hanukkah treats could result in a variety of gastrointestinal issues, including vomiting and diarrhea. Also, some ingredients can have even more dangerous consequences. The onions in latkes, for example, can cause Heinz body anemia in both cats and dogs.

If a pet ingests any potentially harmful product, call a veterinarian or a local emergency animal hospital immediately.

Brooks has no fear! 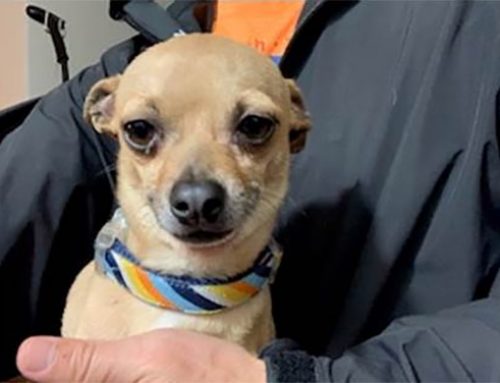 Could You Be Brett’s Forever Home???