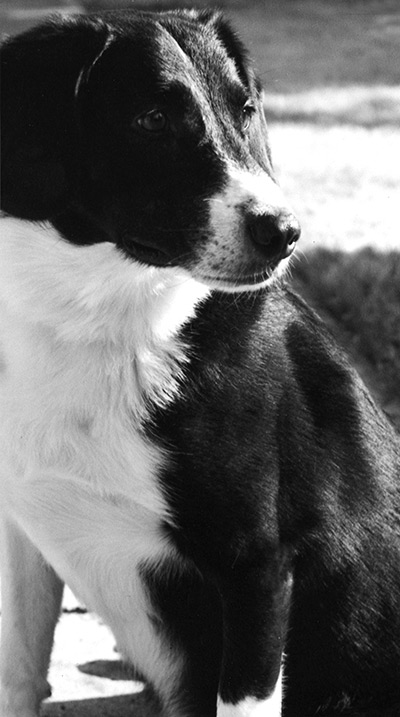 … My main motivation happened many years ago.

I wrote this story and emailed it to my friends.  It was forwarded over and over again, until it was eventually printed in a local magazine. We all probably have that special pet that stands out amongst all the rest. Bippy was that pet for me.

My dog died today. Those four words — I can’t think of too many things more painful. If you’re not a dog lover, you’ll probably stop reading right here. If you are a dog lover, you probably have a feeling in your chest like when you lost that trusted friend. I hope mine goes away soon.

It was a normal day, July 10, 1997. Yes, I can’t remember my sister’s birthday, but I can remember the day I found my dog. I was driving southbound on the US 31 Bypass in South Bend, Indiana. There was a dog on the northbound shoulder, just waiting to jump out into traffic. Many times I’ve tried to pick up stray dogs. A few times I’ve been successful, but mostly it was an exercise in futility. Not this day, though. Today, I was armed with a cheeseburger. Little did I know that I was about to meet my best friend, and my best friend loved cheeseburgers.

As soon as I showed him my snack, he did an army crawl over to me. Immediately, instinctively, he trusted me.  I picked him up, this 2-year-old dark brown and white lab mix, all 47 pounds of him, and put him in the back seat.  It’s ironic, because I found later he hated to be picked up.  But he knew a sucker when he saw one, and it was off to the emergency clinic we went.

Heartworm, tapeworm, ringworm, starved skinny, a gash on his nose, and 27 ticks. That was the diagnosis. No worry. One-thousand dollars and a chin on my knee later, he was my dog. I jokingly said I would call him Bypass because of where I found him.  The name stuck.  And soon, he weighed a healthy 60 pounds.

Bypass, or Bippy as we called him, was the perfect companion dog.  He didn’t hunt.  He didn’t fetch.   He didn’t guard the house, and he didn’t do tricks.   He was simply an expert at being my best friend.   Whatever room I was in, he wanted to be there.  When I went for a ride or a walk, he wanted to come.  He loved to share my meals at the dinner table.  He loved to sleep on my bed and couch.  He loved to have his white belly rubbed, and his floppy, velvety ears scratched.  He didn’t chew things up, scratch things up, or tear things up.   Bippy’s only real issue?  — any stray food you may have forgotten to put away was fair game.  I guess that was the scavenger still left in him.

A few years into our time together, I met a girl named Tianne who became my wife. I explained to her that I was crazy about my dog, and she should be prepared. You see, I probably hugged and kissed my dog 20 times a day. That concept was foreign to my wife, as it is to most of the non-dog world. But one day I got a call from her. I’ll never forget the words.  “I just kissed a dog for the first time in my life.”  It sure didn’t take long.  Bippy had won her heart, too.

Since, our family has grown, and moved near Dallas, TX, with my wife and another little dog named Bishop added to the mix.  Everyone knows our ‘family’ — Mike, Tianne, Bishop and Bypass.  Hopefully soon, we’ll have some two-legged children, too.

The only good thing about this gut-wrenching day was the brevity of it. Last night, my dog was perfectly healthy, begging at the dinner table. By 5:30AM, he was in the emergency room in critical condition. We’d often pictured in our minds how this day would go, and the decision we would make. When they told us Bippy had two masses in his belly, and that he had gone into respiratory arrest, I knew our time together had come to a close.

On that back table laid perhaps sweetest, most genuine living thing that ever walked.  And it was time for us to say goodbye.

But not before he got his 20 kisses.